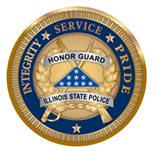 When called upon, the Honor Guard team serves as a tribute to sworn personnel who have made the ultimate sacrifice. The team also pays tribute to deceased active and retired personnel. Tributes include; serving as pallbearers, rifle bearers, and presenting national, State, and ISP colors. The team also participates in national conferences, parades, local and national police memorials, and honor guard competitions. Members of the team are physically fit, possess impeccable uniform standards, are in good standing with the Department, have a willingness to perform close quarter drill and ceremony, and appreciate the meaning of Integrity, Service and Pride. Initially, team members receive two weeks of training, followed by monthly in service training. The team wears Honor Guard uniforms, which distinguishes them as members of the team. The team consists of a North and South unit, which consists of approximately 50 officers.