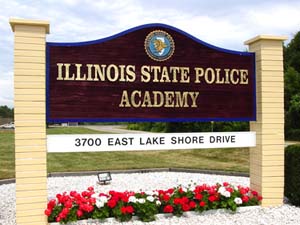 The Illinois State Police Academy was constructed in Springfield, Illinois, in 1968. A large addition was added in 1972, making the building self-contained for housing and training. This complex, which sits on approximately four acres of ground, represents the first permanent home for cadet training. The first class to graduate was Cadet Class 51 in November 1973. Prior to the Academy's construction, most of ISP's training was conducted at the Illinois State Fairgrounds.

The Academy has undergone several changes through the years. The facility now includes 280 beds, a gymnasium with free weights and state-of-the-art exercise equipment, a one-quarter mile running track, video and computer accessibility, and a full-service cafeteria.

The Academy also includes the Pawnee Training Facility, a 100 acre complex ten miles south of the main facility, which was completed in the fall of 1988. This is where K-9 training, a track for Emergency Vehicle Operation Course, and firearm ranges are located.